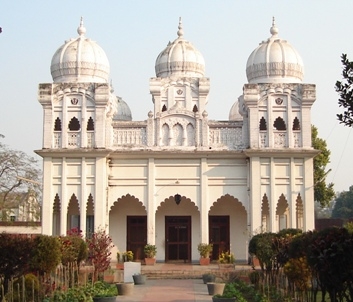 Sardar Nagar is less than 5 kilometers from Chauri Chaura. This small industrial township was built by a Sikh family from Majitha village of Punjab. Majithias came from Punjab and settled down at this place called Saraiyan which was a small village. The family was loyal to the British rulers of that period. Once this place was a flourishing industrial town with a very big Sugar Mill, a Steel Plant, and a Distillery running 24 hours providing employment to local people. However, these days the situation is not very healthy as most of these units have been declared sick units.

Back in the 90s, Sardar Surjeet Singh Majithia, known in the area as Sardar Saheb, owned a private railway network and private aircraft. However, after his death, things started deteriorating and heirs could not keep the industry going. Most of the development still dates back to his days. The British also gave them honorary titles of "Sir" and "Lady". There is a Government Girls Inter College and another college named after Lady Prasanna Kaur (Lady Prasanna Kaur Inter College) situated in Sardar Nagar. There is also the first indoor Badminton Court built by Majithia exclusively to cater for Late Syed Modi, many times national badminton champion. Syed Modi was from Sardar Nagar. Syed Modi, eight times national badminton champion was shot dead in Lucknow on July 28, 1988, by unidentified assailants as he came out of the K D Singh Babu stadium after a practice session. Over 16 years after national badminton champion Syed Modi’s assassination, the Supreme Court upheld an Allahabad High Court order discharging Rae Bareli MLA Akhilesh Singh in the murder.

There is also a very beautifully built Gurudwara near Sugar Factory in Sardar Nagar. This was built by Majithias to cater to local Sikh people.