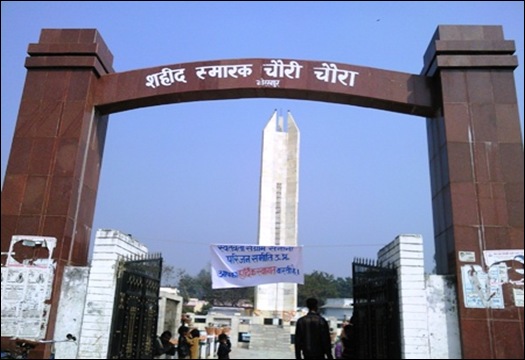 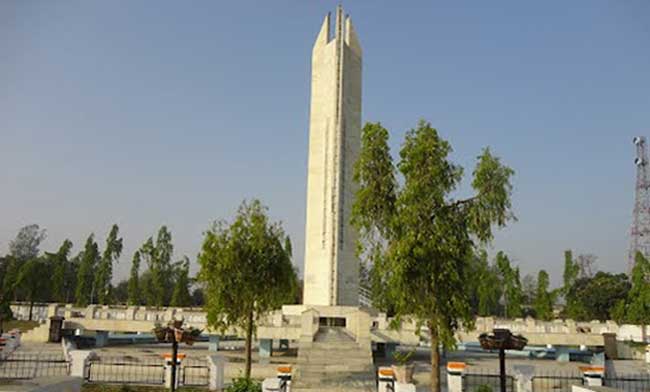 When a large group of protesters participated in the non-cooperation movement boycotting mocking foreign cloth, meat, and liquor.

Mahatma Gandhi, who was against violence after this, was shocked and withdrew his year-old ASAHAYOGA ANDOLAN (Non-Co-operation movement).

When leaders like Jawaharlal Nehru, Sardar Patel, and Rajendra Prasad reluctantly accepted Gandhi’s call. Lala Lajpat Rai notably said of Gandhi's decision: “Our defeat is in proportion to the greatness of our leader.”

Many people from different places, especially from Chauri Chaura, still have the opinion that Gandhi’s decision to call off the movement after the Chauri Chaura incident was unjustifiable.

“In Chauri Chaura, they didn’t just accept police brutality like in Jallianwala Bagh, unhone bhi jawab diya (they retaliated). It was the first and last event of its kind in the freedom movement,” said Ram Narain Tripathi, grandson of Meghu Tiwari, who was among the 19 hanged by the British.

Several freedom fighters were hanged by the British Government of that period and several others were sentenced to the cellular jail on the Andaman Islands, known as Kala Pani(Blackwaters). SHAHID AMIN, a professor of history at the University of Delhi, who hails from Deoria (15 miles from Chauri Chaura), has written a famous book on Chauri Chaura titled "Event, Metaphor, Memory: Chauri Chaura 1922-1992" published by the University of California Press. This book has complete details regarding the Chauri Chaura incident. Chauri Chaura is a Tehsil comprising Sardar Nagar and Brahmpur blocks.

While addressing the country during the celebration of the 100th year of the Chauri Chaura incident, PM Modi said that the martyrs of Chauri Chaura had not been talked about and remembered as much as they should have been.

PM Modi stated that “ Although, they have not been given significance in pages of history but their blood is in the soil of the country and keeps inspiring us.”

Chauri Chaura is also known for its Dal and Gud (Pulses and Jaggery) Mandi.

There is a big leather market too, known as Chamadahiya Bazaar (Leather Market) to supply hide (Khal or raw leather) to markets as far away as Kanpur and Calcutta.

Chauri Chaura has a population of 453,414 comprising 230,232 males and 223,182 females. Most of the urban population is in Mundera Bazar (also shown in old maps as Murera). Chauri Chaura, being tehsil headquarters, caters to most of the needs of people residing in neighboring villages as far as 10-15 kilometers. It also serves as a ready market for agriculture and craft products of the area.

Nearby attractions in Chauri Chaura include the famous Tarkulha Devi Temple. There is a month-long mela (funfair) every year starting from Chaitra Ramnavami at the Tarkulha Devi Temple. People from far-flung locations visit ‘Tarkulha Mela’ to shop for their annual requirements of Garam Masala (Indian Spices) and to enjoy the traditional ‘Nautanki’ (drama), Nag Kanya shows, and small circuses. Also, Tarkulha Devi Temple was Shaheed Bandhu Singh's favorite place. People here are peace-loving and courteous. The majority of the urban population is from the business community with a mix of Marwaris (migrated from Rajasthan) and Deswalis (local Vaishya community), with a very small number of Punjabi communities.

Several other people like teachers, doctors, and government employees have made Chauri Chaura their residence due to its being the only urban hub for more than 200 villages; with facilities like Schools, Colleges, Railway stations, Tehsil Headquarters, Banks and Postoffice, etc. One can find people from all religions like Hinduism, Islam, Sikhism, Jainism, and Christianity living peacefully in Chauri Chaura.

Chauri Chaura was able to get the road connecting Gorakhpur to Deoria widened and re-made due to its close proximity to the famous Buddha circuit ( Buddha Paripath) comprising of Naugarh (Kapilvastu), Sarnath, Bodh Gaya, and Kushi Nagar.

Gorakhpur is the nearest airport to reach ChauriChaura or You can come to Gorakhpur or Varanasi by flight. From here one has to come to Chauri-Chaura via train or bus or taxi.

To reach ChauriChaura one can take a train up to Chaurichaura Railway Station CC or You can reach here by train from Gorakhpur or Varanasi. Its distance from Varanasi is 198 km. Most of the trains from Delhi to the North-East pass through this route.

Buses and taxis are available to ChauriChaura. Buses going from Gorakhpur metropolis to Deoria or Varanasi pass through here or You can reach here by any private taxi from Varanasi or Gorakhpur.

What was the Chauri Chaura incident?

A group of freedom fighters had set a police station on fire at Chauri Chaura in Gorakhpur district of Uttar Pradesh on February 4, 1922, to protest against the high-handedness of the British government. The incident claimed the lives of 22 policemen and three freedom fighters. As many as 19 freedom fighters were given capital punishment for this one incident.

PM Modi also released a postage stamp to signify the commencement of the centenary celebrations of the Chauri Chaura incident.

"The day marks 100 years of the 'Chauri Chaura' incident, a landmark event in the country's fight for independence," the release by the Prime Minister's Office stated on Wednesday.

Chief Minister of Uttar Pradesh, Yogi Adityanath was also present at the event. The centenary celebrations and various events outlined by the State government started in all 75 districts of the state.

The Yogi Adityanath government in Uttar Pradesh strived to create a world record during the Chauri Chaura centenary celebrations, when around 50,000 children from all districts recited 'Vande Mataram' on February 3 from 10 am to 12 noon on February 4.

"The State Government led by Chief Minister Yogi Adityanath has stated to hold year-long centenary programs in view of 75 years of independence and has plans to develop the 'Chauri Chaura Shaheed Memorial' as a heritage tourist spot," read a press statement from the Uttar Pradesh government.

The Chief Minister has insisted to plan the program with the aim of inculcating a sense of patriotism in the minds of the young and expressing thankfulness to the freedom fighters who had made sacrifices for the country's independence.

The Uttar Pradesh government aims to impart the feeling of patriotism in the youth and to make sure that the new generation is sensitized by the sacrifices made to achieve freedom, the statement added.

1) In the 1922 episode, Modi said, "Whatever happened in Chauri Chaura 100 years ago was seen as a simple incident of arson at a police station. The fire was not only at the police station but in the hearts of Indians as well," he said.

2) The prime minister did not refer to Mahatma Gandhi's decision to call off the non-cooperation movement over the violence by his followers. "Chauri Chaura was a self-motivated struggle of the common people. It is unfortunate that martyrs in this incident were not given a noticeable place in the pages of history," he said, acknowledging the Uttar Pradesh government's plan to remember it.

3) Stressing the need for unity in the country to attain the goal of 'Atma Nirbhar Bharat' and make India a great power in the world, Prime Minister Narendra Modi said, "unity had helped us to achieve freedom from the British rule and it will also help us in achieving our goal for 'Atma Nirbhar Bharat'.

4) The prime minister also listed points in the recent Budget that he said will help farmers. "A lot of actions have also been taken to empower farmers. Over 1,000 markets were connected with farmers so that they could sell their crops anywhere. Over Rs 40,000 crore for rural infrastructure will help farmers," he said.

5) He also said the government is also focusing on creating healthcare facilities in rural areas so that people do not have to go to cities for better treatment.