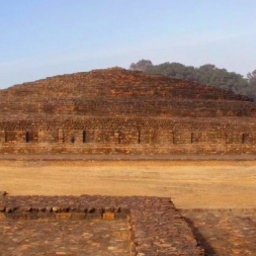 Relics of Buddha found during excavation at Kapilvastu Stupa at Kapilvastu 97 Km. north of Gorakhpur, on the state highway-1A, Kapilvastu is now being developed as an International Buddhist Pilgrimage Centre. Here, Lord Buddha spent 29 years of his early life. There is a big stupa, from where the relics of Buddha were discovered during excavations. Ruins of monasteries & palaces can be seen at Ganvaria. Also, there are some other historical religious places of worship, the shivling, Narahi, Kubernath, and Palta Devi are temples of attraction. Narahi temple is dedicated to Surya, the Sun-god, and built on the pattern of Konark Style.

Via Kathmandu to Bhairahawa Airport, about 40 kilometers east of Taulihawa. It takes 45 minutes and costs about $200 for foreigners and $115 for nationals. Carriers include Buddha Air, Yeti Air, 160 NRs airport tax applies for all domestic flights.