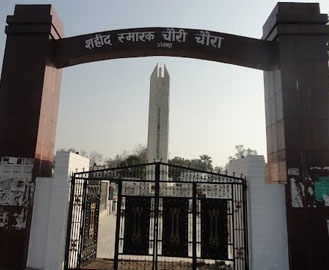 Chauri Chaura incident happened on 4 February 1922 when the crowd of people consisting of volunteers of the Indian National Congress, as well as the Khilafat Movement who were together participating in the Non-co-operation movement, started by Mahatma Gandhi.

On a fateful day, approximately 2000 to 3000 protesters had gathered to picket the liquor shop at the local market in Chauri Chaura. One of their leaders was arrested and was some crowd was also protesting and for the release of their leader in front of the police station. Armed police were dispatched to control the situation while the crowd marched toward the market and started shouting anti-government slogans. In an attempt to frighten and disperse the crowd, the police fired warning shots into the air but this only agitated the crowd who began pelting the police with stones. With the situation getting out of control, the sub-inspector ordered the police to open fire on the advancing crowd, killing three and wounding several others. Reports vary on the reason for the police retreat with some claiming that the police ran out of ammunition while others claim that fear of the crowd's unexpectedly courageous and angry reaction to the gunfire was the cause but whatever the case, in the ensuing chaos, the heavily outnumbered police fell back to the shelter of the police chowki while the angry mob advanced. Infuriated, the crowd took revenge by setting the chowki ablaze, killing the 21 or 22 officers trapped inside.

Gorakhpur is the nearest Airport to reach ChauriChaura.

ChauriChaura is well connected by train. Most of the trains going towards Deoria stop at Chaurichaura.

From Gorakhpur or Deoria Buses and Taxis are available to reach chauri chaura.